A geothermal system for a deserving family 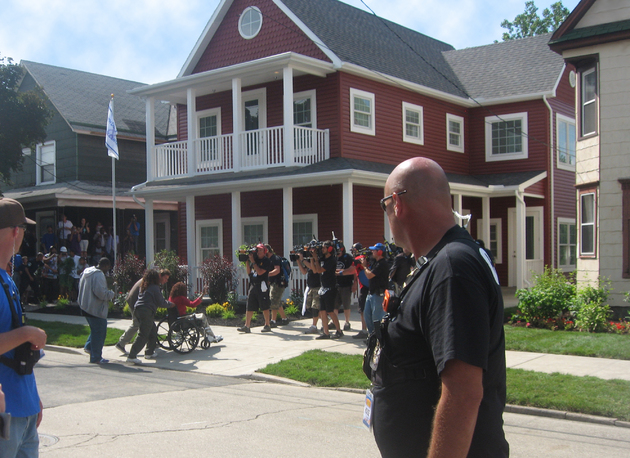 Tim Yoder, the owner of the family-owned company, had this to say about the project, “I think this was one of the most exciting jobs our employees have worked on in a long time!

The suspense surrounding an “Extreme Makeover Home Edition” build is tremendous because everything is kept secret, even the address, until the camera crew arrives at the family’s front door.

We were given limited information when asked to take part in the project.  Right away we knew it would be a challenge.  They told us there would be a large commercial property where we could stage our equipment and gain access to the site.  We took a leap of faith, in over 120 projects the extreme makeover group had never failed and we felt pretty confident that we could install a loop system in the time allotted, so we agreed to do the project.

Now with a few weeks remaining until the project began, we hurried to prepare our equipment, contact government agencies about drilling regulations, acquire the necessary licenses and permits, bring our volunteers together, and sign agreements with EMHE.

Finally, on June 26th they told us we would be setting up in two days…and they informed us that we had only 10 hours to complete the job. Because a truck carrying building supplies overturned on its way to the site, the project was quickly delayed six hours.  Our set-up time was moved to midnight on Sunday the 28th. The site turned out to be one of the smallest we have ever drilled. Our plan was to fit two rigs into a back yard that was only about 40 x 40 feet!

Erie, PA isn’t close to home, so we had to be ready to leave Sunday Morning.  The four hour trip isn’t easy with a convoy of two drilling rigs, two trucks with trailers, and two pickups.  After arriving safely in Erie, we drove together to the building site to check in and pick up our “Extreme Makeover” T-shirts and hardhats before finding a place to eat.  Once in the restaurant we became instant celebrities as people came by to talk to us about the show.  Everyone wants to be part of something special and we were privileged to be chosen.

After further delays, it was 3 a.m. by the time we were permitted to set up our first rig and begin drilling. But thanks to a great volunteer crew who was willing to give up their weekend and work hard through the night, we completed the system and pulled off the site in just over six hours.”

Yoder Drilling and Geothermal was pleased to be a part of the “Extreme Makeover Home Edition” knowing that the Ward family will not only enjoy efficient heating and cooling that geothermal provides, but will save hundreds of dollars on their heating and cooling bills in the years ahead.

The Yoder family is committed to sharing the benefits of geothermal energy with the public and to helping their customers save money by “tapping the green energy in their own back yards”.